I don’t like shooters, and I don’t like broadly understood SF either. That’s why I didn’t wait for Outriders. Another game. Despite the fact that I was very prejudiced, the game stole my heart after a few hours. People Can Fly studio introduces several brilliant solutions that positively affect the broadly understood Player Experience. There are also a few bugs, but they don’t cover the overall gaming experience.

The player is not thrown into deep water. The game gradually discovers new functionalities and gives you time to get used to them. This is nothing innovative, but many game developers forget it and think that a one-off tutorial at the beginning of the game is exhausting the topic. Here, the next elements are revealed after several dozen minutes, and the crafting itself is only unlocked in one of the first missions.

Loot falling from successive enemies will quickly fill your inventory. The screen architecture is very well done though. At first glance, you can find “New items” and you know immediately which of them are better than the currently used. This functionality was missing in such large titles as the last Assassin’s Creed. Details require an extra click, but that’s good because, to be honest, you don’t need them.

Getting rid of unnecessary equipment does not require looking for the nearest buyer. You can easily dismantle an unused weapon. You can select subsequent elements and perform the entire action at once. You can also select items at the same time by their rarity. The rarity itself is clearly marked in color and you can see it falling out of the defeated opponent. Not only that – the most valuable loot is visible on the minimap so that the player does not miss them.

The ability to upgrade items of equipment is great. You change modifiers, characteristics, or raise the level of your weapons. These are separate actions, but clearly defined, thanks to which you consciously build your soldier.

A navigation system that guides you like a string. Even though it is a tightly closed world and it’s rather hard to get lost in it, there are places where it helps a lot. I wrote about how navigation affects the Player’s UX while reviewing Cyberpunk. The red marker directly on the combat screen isn’t too intrusive either.

The location minimap is not the best solution. The rectangular shape forces you to rotate the map to see enemies. Also, the lack of an outline of the area is sometimes irritating. The quest map, on the other hand, is totally useless. It only shows your current location and lists quests. This is a more bulleted list with the graphical outline of the area.

You can lower the game level at any time. There is nothing innovative about it, but you have full transparency of the consequences. You know how it affects Looting and the difficulty of your opponents. This allows the player to make informed decisions. The default activation of automatic top-level selection is also ok. Especially that if you die several times within several minutes, you get a reminder about the possibility of lowering the level.

Such a large production was not without mistakes. Immediately after the game’s premiere, the instability of servers significantly discouraged. In the current xbox version there are problems with navigation (leads to inappropriate quests, or loops on one of them. Too little thickness of the font also deserves criticism, which forced me to get up from the couch as I wanted to read, for example, descriptions of weapon modifiers.

You can skip the cutscenes – this is the most important thing. At the same time, the dedicated scene for entering and exiting a location is probably very redundant. Especially that at times it is a jump of a one-meter distance – and this already looks comical.

There was also a lack of consistency in navigation. I would personally condemn the person responsible for choosing the button on this popup to play all day on unstable servers with a bunch of twelve-year-olds. 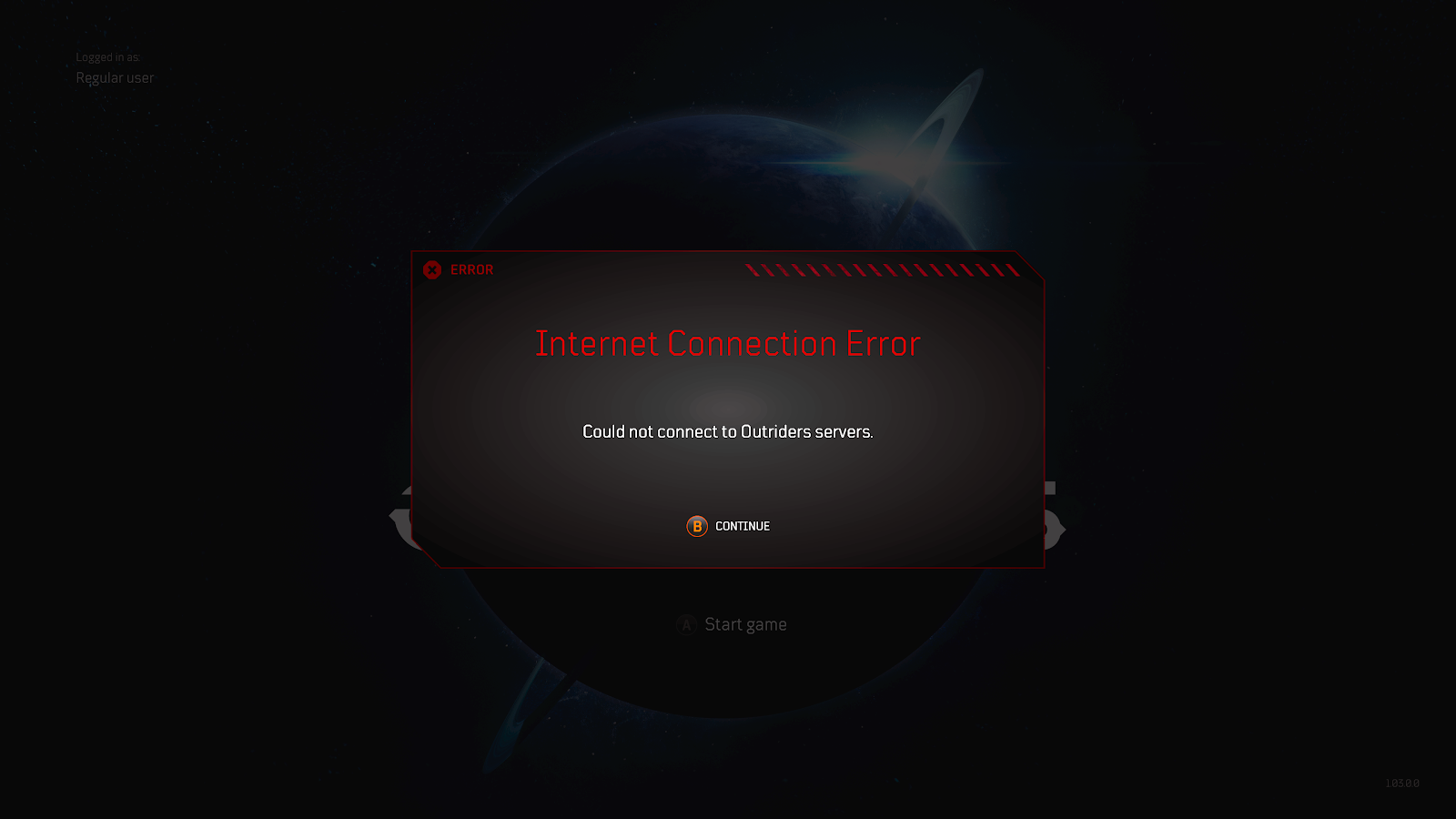 This is a great game. RPG elements nicely woven into a futuristic shooter. Visually, the game is really top notch. It’s hard to find fault here. People Can Fly made a great game and this is the third strong title coming from the Polish studio in the last six months – next to Medium and Cyberpunk. Although these are different productions and it’s hard to compare them, it is the outriders that give me the most fun of the game.